Encore: Sure on This Shining Night 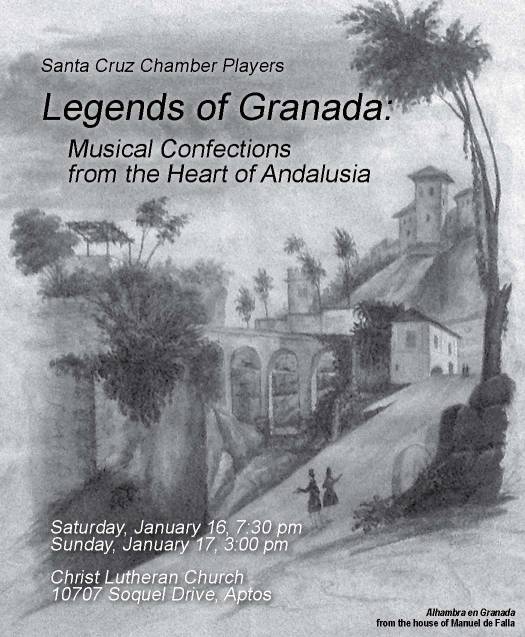 Featuring Spanish composers and poets who were either born in Granada or inspired by the Andalusian city, this concert celebrates what was once a thriving center in Moorish Iberia. A selection of tapas opens the show: Albéniz miniatures, including the iconic Granada, selections from Falla’s famous Siete Canciones Populares Españolas for soprano and his seldom heard Soneto a Cordoba featuring tenor, cello and harp.

Tárrega, the most important guitar composer of the Romantic era, shares delicious morsels including Recuerdos de la Alhambra, Capricho Árabe and Lágrima. Renaissance master Luys de Narváez adds to the pot with his intabulation of Josquin’s Mille Regretz and the charming set of variations on Guárdame las vacas (Mind my Cows).

Contraponientes is our main course. It’s a song cycle for soprano and tenor; a lyrical and vibrant setting of poems by Federico García Lorca composed by artistic director Chris Pratorius-Gómez.